Notes the start of the 2014 season

It’s an exciting time of year, much work has been going on in the vineyard, during the last three months a lot of last years growth as been pruned in readiness for the new growth of 2014. Some vines still need pruning but that’s happening over the next few days.

Pruning is a tough task, not only do the vines have to be pruned but they also need carefully training along the support wires to make sure that as the vines develop they form the optimum shape for maximum grape production with minimum disease, in successive years (as the vineyard develops) this task will become easier, but with a young vineyard it requires a lot of work. If they are not right at this stage it will make for lots more work later in the year to ensure that the leaf canopy does not get to be too thick to shield the grapes from the ripening sun and the air movement afforded by the wind which helps minimize botrytis and mildew.

The frost control system has been checked and prepared in readiness for the time window when the vines are at their most vulnerable, that is during the next six weeks or so, when the new growth starts and frosts are still a possibility.

The individual leaf buds are beginning to get bigger so hopefully the sight of the first  leaves of 2014 is not far away. 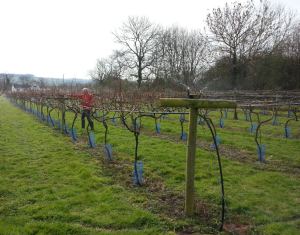 Yesterday the frost system was switched on to check that the pump was working, that the filters were clean and the flipper heads were working.

Plans have been made to service the tractor this week and to make sure its ready for the years work ahead.

Some of the vertical posts that support the vines have rotted and its planned to replace those whilst the ground is still soft.