With many lessons learnt and the vineyard having grown to its current size of 1700 vines it was hoped that 2013 would be a great year, with the vineyard producing not only its Siegerrebe variety, but also the start of its first bottles of a sparkling wine. Due to international law it can not be described as “Champagne” but its sufficient to say that the wine is being produced by the same method and hopefully the results will be excellent,

Indeed other English Vineyards have produced wine that, in blind tasting’s, has bettered some Champagnes and have been named the best sparkling wine in the world. 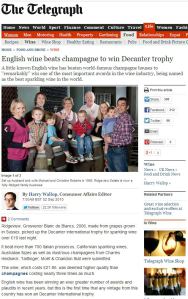 Due to the loss of the crop in 2012, we decided to commission the design and installation of a frost control system (see “Frost” page for details). Unfortunately, Steve badly broke his ankle whilst on holiday in France, requiring surgery and metal plates. He was stuck in France for five weeks in early spring, which meant that he was not able to personally start the spraying regime of the vineyard or to help finish the installation of the frost control system.

Friends stepped in to help in his absence. 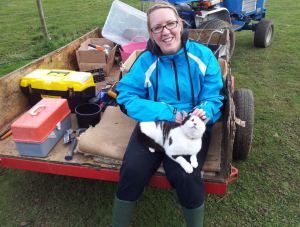 Willing helper’s whilst Steve is stuck in France with a broken ankle – Andie, with Steve’s cat Maria, (Maria the cat is in charge of mouse control!!)

The frost control system was finished (see page on frost control), but was not needed for 2013. Spring started late and as a result the young growth did not start until after the risk of frost passed.

Steve tried an experiment of putting a cupful of “Bone and Blood” fertilizer (an organic type fertilizer) at the base of each vine in the hope that this would help the vines recover from the very aggressive attack of Mildew in 2011. It’s hard to say for certain if this helped produce the incredibly vigorous growth of the vines through the season. Shoots could be seen growing several inches per day at the peak of the season.

A lot had been learned in previous years and much time was spent by Steve researching modern chemicals for mildew control (Steve is an Industrial Chemist by profession). He suspected that the mildew affecting his vineyard had become resistant to “Systane” and he intended to develop a spray / chemical regime that used the different qualities of the various treatments to the full. Some chemicals acted as a “curative” once the mildew formed, others acted as a preventative with a systemic action in the vine that helped slow down the spread of mildew in new vine growth.

Little information is available on the Internet to help English wine growers specifically, so the work Steve did on this involved many hours of reading and also talking to other vineyard owners. Steve was very mindful of mildews re-known ability to build up a resistance to chemical treatment

Steve discovered for 2013 a new treatment (Amistar Tops) which has a different method of working to Systane for Mildew control.

Another problem was the development in previous years of botrytis as the grapes ripened, this is a well known problem for vineyard owners and was the final straw that finished of the grapes in 2012 what had not been damaged by mildew. Steve had previously relied upon Systane as a multi-function treatment to help control both  mildew and botrytis.

In 2013, both mildew and botrytis reared their heads again, but due to the use of the new anti mildew chemical treatments that was held in check. However botrytis proved to be a nightmare, The chemical regime for that had been extended to include Rovral and  Fenheximid.

On reflection a number of points became apparent, first the treatment regime for botrytis should have started earlier in the year (the grapes were first treated for botrytis in late summer), the canopy of leaves was allowed to grow too much, which did not allow enough air movement around the grapes to minimise spots for the mildew and botrytis to develop and also the spray delivery technique needed improvement. The dense leaf growth stopped much of the spray reaching the covered grapes (spraying had been from overhead the vines).

The next problem to hit the vineyard was WASPS!! They love the sugar content of the grapes and in August the vineyard was literally covered by thousands of wasps making it difficult to even walk through the rows of vines. The standard advice seemed to be to spray to control the wasps – however the sprays contained many nasty things that would not only kill the wasps, but the ladybirds and bees that also populated the vineyard. This was a major problem for Steve, only wishing to get rid of wasps. Please have a read on the “Wasps” page how the problem was ultimately resolved (it took just 48 hours to almost clear the vineyard of wasps, but  left unharmed all the bee’s and ladybirds)

Steve estimated that approximately 25 – 30% of the total  grape production was lost to either wasps or botrytis. Great care was taken at harvest to ensure that only quality grapes made it to the winery.

Hopefully now that Steve has found a simple, quick and effective control for wasps that the percentage of crop lost to them should be very little in 2014.

It might all seem common sense in hindsight, but it is a difficult learning curve, trying to manage a full time job, maintain a vineyard and learn as you go are all difficult tasks.

After all the trials and tribulations of 2013, Steve did manage to harvest nearly 3.5 tonnes of grapes, in what was two harvests, first the Siegerrebe and then some weeks later the Seyval Blanc.

The grapes loaded on the lorry, and the first of the years crop is ready to go to the winery