My apologies for the lack of updates since March, this year has been very busy. A late (but relatively mild) frost proved the success of the frost prevention system, It was a pleasing sight to see that the system had activated early one morning (at present the system only covers the original vines), The protected vines were free of frost, the others were coated with frost.

The protected vines grew extremely vigorously, and required very aggressive pruning, the other vines did eventually pick up, and also required (later in the season) aggressive pruning. The frost seemed to delay development for a few weeks in the unprotected vines, one must wonder if this was a contributory factor in the eventual yield of the vineyard being similar to the 2013 yield, rather than much more, as would have been expected in what has been a very good growing season.

However, the actual grapes harvested were a better quality than the 2013 crop (which was still good quality grapes, its just that the grapes harvested in 2014 are even better) The 2014 acid figure at harvest was around 9.2 (it had been 9.7 – but a weeks rain dropped the figure) with sugar figures in the high 60’s. Its anticipated that this years wine will be very, very good. 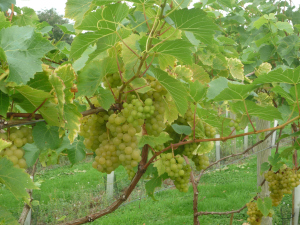 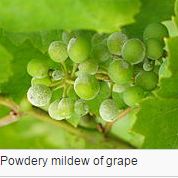 “Powdery mildew is a fungal disease that affects a wide range of plants. Powdery mildew diseases are caused by many different species of fungi in the order Erysiphales. It is one of the easier diseases to spot, as its symptoms are quite distinctive. Infected plants display white powdery spots on the leaves and stems. The lower leaves are the most affected, but the mildew can appear on any above-ground part of the plant. As the disease progresses, the spots get larger and denser as large numbers of asexual spores are formed, and the mildew may spread up and down the length of the plant. Powdery mildew grows well in environments with high humidity and moderate temperatures. In an agricultural setting, the pathogen can be controlled using chemical methods, genetic resistance, and careful farming methods. It is important to be aware of powdery mildew and its management as the resulting disease can significantly reduce crop yields”

A spray regime has now been developed at Little Oak Vineyard, that has kept the Mildew and Botrytis at bay with a minimum of spraying. The Mildew seems to have not developed any resistance to the “Amistar Tops“chemical preventative which we use, unlike the wide spread reports by other vineyards of the disease becoming very resistant to other chemical treatments

The Botrytis seems to respond well to the three chemicals used in rotation to help prevent any disease resistance buildup.

The ongoing issue of rotten posts has taken a lot of work this year, a sleeved system has been tried on the new wooden posts (that works by protecting at ground level (where the posts rot) the wooden post by encasing it in a bitumen lined sleeve, which will hopefully extend the post life beyond the 5 – 8 year life max that we now see for a support post. We are also going to trial some metal posts to hopefully further reduce the annual amount of work needed on the infrastructure  of the vineyard.

The post rot is obviously exasperated by the increased weight of the vines as the vines become more mature.

With the harvest finished it was a lovely site to drive towards the vineyard and see all of the leaves turning into a fantastic sea of autumn colour. 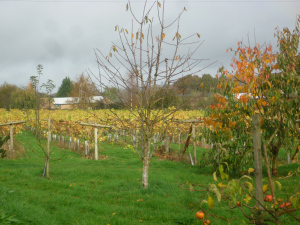 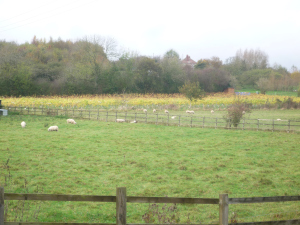